“Behold, I give you the authority to trample on serpents and scorpions, and over all the power of the enemy, and nothing shall by any means hurt you.”

Behold and Be Bold!

When God is for you nothing can prevail against you. What does it mean to prevail?

It’s like a fleet of ships out of harbor anchored through the fiercest of storm. Not one sailor is forlorn. Each knows what his anchor is made from. How about you? Do you know what you’ve been made from? You’ve been carved from a Tree of Longevity.

Could you imagine being on a ship in a troubled sea and only one sailor didn’t have this vision of peace and safety?

It only takes one troubled mind to spread like cancer and corrupt the objective faith of the rest of the crew.

Look at Joshua and Caleb—the only two spies who said, “we can take them!”. How you think is what you become. I wonder if more spies were grabbing their relentless faith, but then only one or two were locker room lawyers sinking the ship so to speak? A team is only as strong as the weakest link. But take heart. The inspired word of God says that you and He make a majority.

Whatever fiercely opposes you. Whatever creates an ominous scene and outcomes are bleak. Whatever makes the waves of life roar like a lion. Whatever hovers over you like a cresting tsunami wave—it won’t take you out, unless you let it.

Get your mind right. Take your thoughts captive. Filter out every negative voice in your own head. God is both Author and Finisher. He promises to finish what He began in you. Release your attempts to control. Realize there is One in control who knows the end from the beginning and beginning from the end.

•Most ships have two anchors, one on the port bow and one on the starboard bow.

“Two are better than one, because they have a good return for their labor” Ecc. 4:9

•The type of anchor used may differ between large ships and small ships, because of what the soil of the bottom of water is like differs in deep sea or in shallower water.

•There is an art to knowing how and where to anchor. Sometimes sailors must dive down to survey the terrain before chooses to anchor.

“That He would grant you, according to the riches of His glory, to be strengthened with might through His Spirit in the inner man.” Ephesians 3:16

•Sailors must do their research when selecting what anchor to buy based on what kind of boating they will do. Knowing your confidence in your anchor is called “anchor faith”.

Surely God is my salvation;
I will trust and not be afraid.
The Lord, the Lord himself, is my strength and my defense; he has become my salvation.”
Isaiah 12:2

Have faith in your Anchor. He alone can save, but He will raise up people and resources to help you. He can do it alone—but He chooses to use us in His marvelous plans and deeds. Be an anchor that holds, drawn and held by the only one who can truly hold everything. He cares about the fierce storms of life and he care enough about the contents of your own heart and mind. Both have storms of their own.

Allow this day His Love to blaze through you and plunge deep. He will give you rest and peace even in the midst of all that would rage like the sea about you. He’s got you. 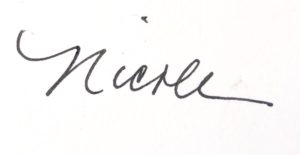 You can share this story by using your social accounts:

My name is Nicole and the Broken and Unspoken things have fueled my wings and given me something brave, something bold. I do believe as we persevere through the unspoken difficulties in life we can find our voice and that voice can be used to help others take flight. I’m a lover of the pen and the ink I wield I hope lavishes encouragement on the minds, hearts and souls of others. Welcome to my home! I plan to use the space to make you feel comfortable, refreshed and blessed. My encouragement intended to help you find that better version of you that has been there all along. I am a writer of prose, poems, scriptural exhortations and all things fitness and nutrition. Mind. Body. Heart. Soul. It is all connected! So come in and make yourself at home. This is a Safe Haven and Refuge for others who have been broken, too.